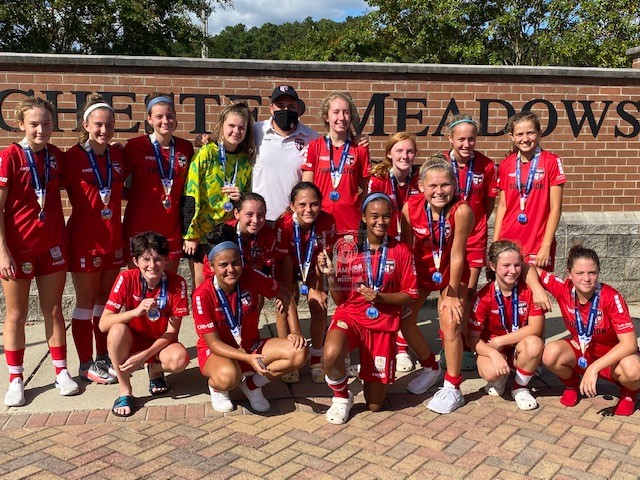 Two Coast FA teams returned home with well earned trophies from the Charlotte Independence Cup over the weekend in Rock Hill, South Carolina. “ This is not a tournament where you typically bring home an abundance of medals due to the level of competition in all divisions. This event is chock - full of teams from massive clubs throughout North and South Carolina so championships are few and far between. Overall we were happy with the performance of our teams this weekend “ said Coast Director of Coaching Ross Morgan.

The Coast 06g Red team (click for image) coached by Dan Martin stole the show in the U15 girls top division. The girls reeled off four consecutive victories on their way to claiming top honors while posting fifteen goals for and conceding just five. “The girls did a fantastic job all weekend and improved upon every performance while demonstrating the ideas and techniques we have been working on during the pre season. To finish off the Independence Cup as champions fills me with great pride and I am excited to see what this group can achieve going forward “ said Coach Martin.

Coach Joel Banta’s Coast 07 Red (click for image) finished as finalist in the U14 top division while posting an impressive 3-1-0 record against terrific competition. “ We had a great weekend making it through to the championship match before falling short to a formidable Wake FC Blue side. We were able to beat two Premier League teams this weekend that we will see again later on down the road in league play. We can definitely build off of our success and I am really proud of the boys “ said Coach Banta.

Jason Monahan’s Coast 04g Black team turned in the best weekend of the young season posting a 2-1-0 record. The girls won both Saturday pool play matches in convincing fashion while playing a nice brand of soccer. Sunday brought elimination in the semi finals to a very organized and technical CISC South Matthews side.